With the Holidays in full swing, it is time for the 2010 PRSA New Pros Executive Committee to say goodbye! 2010 was another fantastic year for the New Pros section and we hope our programs and blog posts have helped and inspired our members.

On behalf of the 2010 executive committee I would like to wish everyone a happy and productive new year. Next year’s programs promise to be the best yet, so stop by the blog in January for an introduction to the 2011 team!

Attending industry events is extremely important for your career, however, for the young professional it can be quite daunting. As the new person on the scene, it is not uncommon to walk into a room, look around and realize “I don’t know a single person here!”

As a fellow new pro, I have often attended events alone and have picked up some tricks to help make the experience less awkward and more rewarding.

Ask to be introduced around: In most cases, board and committee members of the organization that is hosting the event would be more than happy to introduce you to people. It is their responsibility to make each attendee feel welcome and accommodated.”

Follow-up: Follow-up is key to making the next event you attend alone less daunting. The great thing about industry events is that they are attend by the same group of people each time, which means nearly every person you connect with you will see again. I’m sure this goes without saying, but make sure you have plenty of business cards to pass around. When you get back to the office, log-in to LinkedIn and request to add each person you met to your connections (I would recommend personalizing the request to those that you had meaningful conversations with). Following up jogs the person’s memory and signals to them that you consider them a professional acquaintance.

Icebreaker questions: They may seem extremely obvious, however it is surprising how so many people run out of things to talk about so quickly.

If the event surrounds a particular topic, I would recommend reading as much as you can on the subject and come up with some potential questions/talking points ahead of time so you appear informed and can easily keep the conversation going.

Just remember that you are not the only person at an event that’s alone or feels awkward, so by following some of the above tips, you may just make someone else feel more comfortable too.

Andi Wilmes is the director of marketing and communications at Beringea, Michigan’s largest venture capital firm. She can be reached at andrea.wilmes@gmail.com.

PRSA New Pros wants to help you find a mentor who can help accelerate your career and support your growth. To do that, we are working with multiple groups within PRSA nationally to clearly articulate the goals and needs of new professionals participating in a mentorship program. Help us by taking this survey and tell us what kind of mentorship needs you have right now! Deadline to submit is Nov. 5.

Here are some benefits to having a mentor:

Learn what it takes to get ahead and fast. Mentors have put in their dues, so they can provide valuable insight into the skills and qualities necessary to advance your career, as well as help you avoid common mistakes and pitfalls.

Networking: Getting in front of the right people is crucial and mentors will be able to connect you with individuals that can help advance your career, cause or business.

Provide a reference: Depending on the type and length of your relationship, a mentor can be a great reference for you during your career as you apply for jobs, board positions, awards and grad school.

Job Opportunities: Only a small portion of available jobs are posted online, the rest are found through networking. Mentors are well connected within their industries and will be able connect you with prospective job opportunities.

Industry Knowledge: The learning curve for some industries can be extensive. Mentors are a great resource for industry knowledge and will be able to recommend organizations to join, classes to take and books to read to get you up to speed quickly.

As a new professional, building your skill set is key to getting your dream position. But what’s frustrating is how long it can take, especially if you rely solely on your current position to provide you with the right opportunities and experiences to build your skills.

In my first position, I realized right away that my job description was only going to allow me to build my skills so far. So how do you gain the other experiences and skills needed for your dream position? Here are some suggestions:

Take classes: If you dream job requires you to have experience using certain software programs and technologies, or skills such as budget management, grant writing, etc., see if your local community center, college or technology institute offers classes. For example, my dream position requires proficiency in the Adobe Creative Suite, so to gain those skills, I started taking continuing education classes at a local community college, which were affordable and fit my work schedule.

Freelance: Freelancing is a great way to gain experience and build your skills (and in some cases earn a little bit of extra money!). For example, my dream job will likely require B2C social media experience. In my first position, my social media experience was exclusively focused on B2B companies. So to gain valuable experience promoting a consumer product online, I approached my local coffee shop and offered to develop their social media programs for free (and a coffee now and then).

Join an Organization: Community, social and professional organizations rely heavily on volunteers to organize and promote their programs and initiatives. If you’re looking to gain leadership, event planning, fundraising, etc.  experience, ask to become more active in the organization. For example, I wanted to gain experience as a blogger so I joined the PRSA New Pros and I’m now blogging for you fine folks! 🙂

FYI: The PRSA New Pros are looking to fill a number of key positions on its Executive Board for 2011 (information on the nomination process will be posted/emailed soon).  In the meantime, we are always looking for bloggers and individuals to help us manage our social networks. Contact me or Janet Krol if you’re interested in building your skills!!

Coach or Mentor: Many senior level positions require management and leadership experience. And what better way to obtain it than to coach of bunch of youngsters. The ability to get a group of individuals successfully focused on a goal and then achieving it, translates easily to the workplace.  Mentoring will also give you valuable experience cultivating the skill sets of others and will translate well when you’re directly responsible for motivating and managing a team in the workplace.

Andi Wilmes is the director of marketing and communications at Beringea, Michigan’s largest venture capital firm. She can be reached at andrea.wilmes@gmail.com. 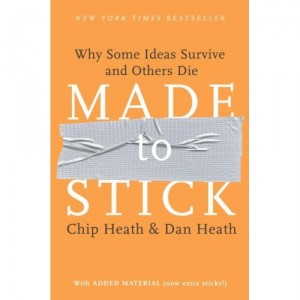 Messages come in many forms: corporate mission statements, taglines, campaign mantras, etc. And, all have the single goal to be memorable. Like we established in the last post, why bother creating messages that don’t stick in people’s minds and drive people to action?

Sticky message – John F. Kennedy once said, “Put a man on the moon and return him safely by the end of the decade.”
SUCCESs principles used: simple, unexpected, concrete, credible and emotional

Not so sticky message – If JFK was a CEO, he would have likely said: “Our mission is to become the international leader in the space industry through maximum team-centered innovation and strategically targeted aerospace initiatives.”

Sticky Message – A pomelo is basically a supersized grapefruit with a very thick and soft rind
SUCCESs principles used: simple and concrete

Not so sticky message – A pomelo is the largest citrus fruit. The rind is very thick but soft and easy to peel away. The resulting fruit has a light yellow to coral pink flesh and can vary from juicy to slightly dry and from seductively spicy-sweet to tangy and tart.

Additional sticky messages you may remember…

The Golden Rule: Treat others as you would like to be treated
SUCCESs principles used: simple, concrete and emotional

Made to Stick will make you a better communicator. So remember, for sticky messages, follow the six SUCCESs principles (Simple, Unexpected, Concrete, Credible, Emotional and Stories) and watch people not only recall you message, but be moved to action as well.