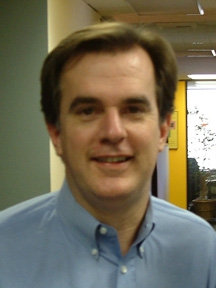 Next week, Thursday September 24, the New Professionals of PRSA will host an in-person networking event–Honing your Social Media Skills. The event will be held at the Gordon Biersch Brewery Restaurant in Midtown Atlanta Georgia. Our featured speaker, Ben Garrett , is the Executive Producer for On the Scene Productions, a digital media company specializing in video, but before he went digital Ben spent time in broadcast journalism and PR.

Ben has been good enough to give us a sneak peak into next week’s event. Check out this Q&A, and meet Ben and your peers at Honing your social media skills while networking with New Pros in Atlanta. (Keep in mind, you must register within the next few days if you’d like to attend!)

1. Can you describe your experience in broadcast journalism and public relations?

I worked in local and network TV for 14 years before turning to electronic public relations (where I’ve now spent 16 years). Ironically, I started off in print. I was editor of my high school paper and also in college, but an internship at a newspaper convinced me to switch to broadcast journalist–more money, with the added bonus that you don’t have to know how to spell. I was a TV news anchor and reporter at a number of local TV stations, and on the network level as a producer, I worked at Lifetime and CNBC networks in their infancy, as well as a brief stint as a medical producer for NBC’s TODAY Show.

2. You moved from PR and broadcast to being executive producer at a digital media company. How did you become so interested in digital media?

The Chicago TV production company I was working for was purchased by a dot-com. So suddenly we were a digital media company. But the reality was the reason they purchased us was because we were innovating doing TV on the web. We built the first health network for the fledgling Microsoft Network, and were one of the first to do video webcasts. At this point in history, everyone had dial-up, there was no broadband and very few people had e-mail, forget social media, it didn’t exist. But basically the web is just another medium to deliver video, and we’re just as focused on mobile phones now as a delivery device.

3. How has your background in PR and journalism helped you in your role at the digital media company?

My background in TV news has prepared me to be a video storyteller. Once you learn to tell a story in pictures, it can be applied to any visual medium, whether it’s an out-of-home network, digital signage, the web, or your mobile phone. The medium isn’t as important as the storytelling. The only consideration for any visual medium is that if you’re doing something in High Definition for a big screen, you will likely have to make some adaptations to tell that story on a small screen, i.e., your iPhone. Some of the same elements that make a story newsworthy can be applied to making a video “viral”–but viral videos are really more about entertainment value, not journalism.

4. What do you think are the greatest challenges facing the public relations world with respect to social media?

Initially, the greatest challenge for PR was transparency. It’s very important to be honest and transparent about who you are and who you represent. I think we’re addressing that as a profession. Now, the biggest challenge I hear about is ROI–return on investment, and also a new term “ROE”–return on engagement, since social media is about engagement more so than just generating impressions. How do we measure what we’re doing and if its even worthwhile? No one has really been able to put a true value on that yet. At the same time, measurement or no measurement, social media isn’t going away and it can’t be ignored as a tactic. And because social media is about two way communications, that’s a new development, because so much of PR is about communicating one way to a mass audience. Now it’s about one-on-one conversations. It’s a different game now that we’re getting real time feedback from consumers. Communities in social media expect a real time response, and from real people, not an automated response. It’s forcing everyone to re-think their mission, their staffing and their response time 24/7.

5. You’ll be presenting at the PRSA New Pros Atlanta networking event. What information are you most excited to share with new professionals?

New professionals have entered our profession during a major downturn in the economy and at a time when the profession is re-inventing itself. Bad times actually present the best opportunities for advancement. I want to tell them they’ve picked a great career but I also want to give them the benefit of my experience. While it’s almost impossible to learn from someone else’s mistakes, I hope I have made enough for all of them! A lot of people are calling the rise of social media Web 2.0. I was around for Web 1.0, and hopefully some of those lessons still apply. A lot of the things we talked about for Web 1.0 are now only possible with Web 2.0. What’s Web 3.0 going to be? They may be the ones to build it!