I studied public relations at the University of Southern California with the expressed intention of someday heading up communications for a major studio. But after graduating in the height of the Great Recession, entertainment jobs were few and far between, and a former manager 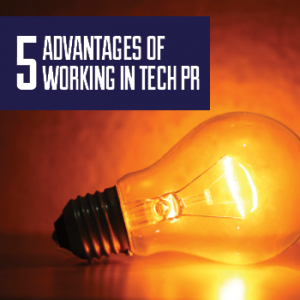 recommended I tried technology. Pursuing a role in this industry is the best decision I’ve made in my adult life.

Here are the top five things you should know if you’re interested in the dynamic world of technology communications.

At first glance, any PR practitioner, regardless of level, may balk at the idea of taking on a tech client. Chances are, you chose this profession because subjects such as science and math weren’t your strongest suits. But that really doesn’t matter.

Just because you don’t have an engineering background doesn’t mean you can’t communicate with engineers, scientists, CTOs or programmers. In fact, it’s often your role to “translate” their jargon into terms mere mortals can understand. And that’s quite rewarding!

It’s no question that this is the golden age of this industry. Startup founders are the new rock stars, tech executives grace the cover of fashion magazines.

People will look back at this era and wax nostalgic about the beginnings – and ends – of technology companies, trends and the characters that move them. Get in on the movement.

3. Being young is an advantage

Especially in startups, executives tend to be young and demand a team that will be able to go toe-to-toe with them on the latest trends. If you’re a new PR pro, you’re likely to be an early adopter of the latest gadgets or the cutting edge of social media.  It’s easier to find your role on teams.

Deep tech, or the enterprise, is undergoing a renaissance as well. And I promise you that some of the most rewarding work can be connected to highly complicated, back-end services and structures.

4. The industry is growing with you

Many of the burgeoning products and trends are facing coming-of-age, just like you: mobile devices, Internet privacy, 3D printing, console gaming – these are product lines reckoning with growth, change and regulation. How much more exciting can it get?

5. Tech affords a diverse crowd that will keep you on your toes

The cast of characters that are involved in technology are some of the most interesting, intellectually stimulating, unpredictable people I’ve ever worked with. They’re mad scientists, relentless humanitarians, have doctorates in medieval studies. They’re immigrants that have overcome amazing obstacles and eventually create billion-dollar companies.

The people that power technology PR have more facets than I can shake a semiconductor at. And that’s a beautiful thing.

Have you chosen or considered a career in technology PR? How has your PR experienced crossed paths with the technology world?

Clare Sayas (@claresayas) is a senior account executive in Edelman’s Silicon Valley office, where she works on a broad range of tech clients, including Adobe, SnapLogic and Evolv. She is also one of the proud community managers for @EdelmanSV.