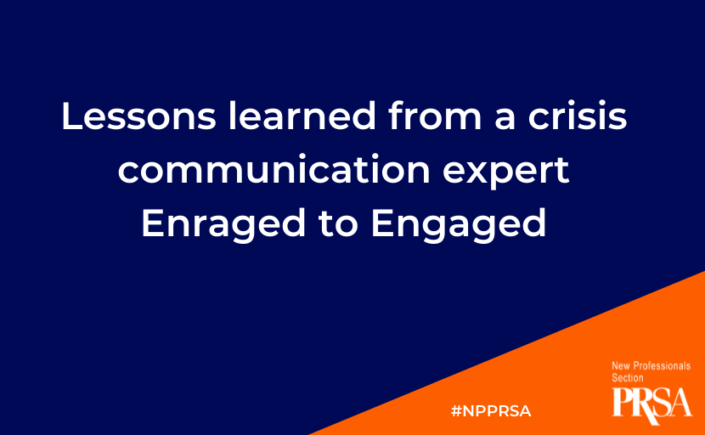 This interview was conducted by current Ball State University public relations graduate student Claire Morrell. The following article is based on that interview with Matt Kelly.

Matt Kelly has worked on many high-profile crisis cases throughout his career. Most recognizably, Kelly provided his professional assistance in cases such as the Deepwater Horizon Oil Spill in 2010. When asked how a professional communicator could best manage and orchestrate crisis communication efforts in the ever-changing digital and social media environment, Mr. Kelly took a personal approach. He shared an antidote from his experience working with BP during this crisis.

When working on this particularly challenging crisis, Kelly reminded himself that the people on the other side of the screen were just that: people. They each have different lives that they lead and different passions and aspirations. The same could be said for the corporation members on the other end of the crisis. Even with everything they were facing, their career is just one aspect of their identity. In this situation, Kelly took a page from Apple TV character Ted Lasso’s book. He created a motto that he and his team of community managers could use as a goal through the crisis, “Enraged to Engaged.”

He acknowledged that it was going to be nearly impossible to change the public’s mind about the corporation he was working with. Instead, they needed to focus their efforts on creating an environment with people who have constructive or positive insights to contribute. His team would create a welcoming environment to encourage dialogue rather than an argument. By doing this, they were gaining back control over the crisis and were able to start repairing the relationship between the corporation and the public. Mr. Kelly emphasized that it is important as communicators to remember that the job of a public relations expert is to be the conscience of the client while providing sufficient information to all parties involved to make a more educated, controlled decision.

More about the Interviewee: Matt Kelly is a digital/social leader and connections strategist. He has worked with top brands like State Farm, McDonald’s, VF Corporation, Discover Card, BP, Dow Chemical, SC Johnson, Conagra Brands, and others to improve their reputation and advance business objectives through smart strategy and creativity. He bridges the gap between creativity and strategy to ensure the brief doesn’t only produce content but moves people toward an objective. He’s a design thinker, brainstorm leader, connections strategist, and channel planner. 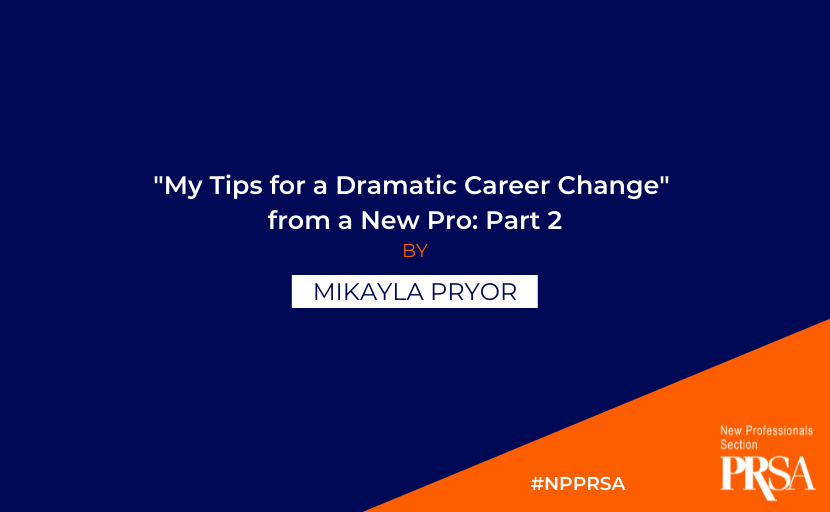 This is the continuation of a three-part series. If you’d like to read my first entry, start here.

Welcome back! I hope my first set of tips was helpful. Now we’re going to dig into a smaller but more technical bit of the process, learning the skills for your new field and revamping your resume.

Time to hit the books! Look for courses and books on the subject you want to learn. My tools of choice are LinkedIn and Coursera. However, there are many more MOOCs that exist besides the two. Taking the time to acquire a new skill set will show that you are qualified when the time comes. It will also familiarize you with jargon and methodical approaches that someone in your chosen field would know, which helps when you want to be seen as a professional. Search the job title and variations of it online. Pick a handful of job openings and study the job descriptions. Similar phrases will give you direction on where to start finding what to study. For example, you type in communication specialist, the terms you frequently see are media monitoring, campaign strategy, adobe suite. That is where your curriculum starts. Whether it is hard or soft skills, you will most likely find it in an online course.

Today your resume is obsolete. This is the time to rewrite it from scratch. Think of all the jobs you’ve had in your life so far. That’s a plethora of skills you can use to your advantage. I worked a series of jobs to pay rent. Housekeeper, retail worker, car parts courier, bench technician, armored vehicle specialist, etc. You get the idea. Every job I’ve ever had had something to teach me, whether it was how to deal with disgruntled customers or how to tin wires with solder. It’s valuable. You can go two routes:

By that, I don’t mean lie. I mean, highlight your accomplishments, the numbers you helped produce. For example, As a retail team lead, your team surpassed their monthly quota by 20% under your supervision. Not only that, depending on the job you’re applying for, look for keywords you could add to your resume to pass the dreaded ATS. Keep it if you see the same language on multiple job descriptions for this job title.

This section may take you a while, but it’s the meat getting you where you want to go. In our last lesson, I will share tips on handling job interviews, especially when they don’t go your way.

What did you want to be when you were in grade school?

As a high schooler, I knew I wanted to be a writer. I was a timid student, but my teachers took notice of my voice and tone in my assignments. I read music blogs voraciously. I thought I would become a music journalist after college. Long story short, I didn’t become one. I joined the military. An officer in my squadron persuaded me to go back to school and finish my degree. There were a lot of ups and downs in my working life. Then the pandemic left me at a crossroads. I had to figure out fast what my next move would be. At the end of 2021, I scored the opportunity of a lifetime, a paid position at one of the top public relations firms in the country, working in their advocacy department.

Now that I’m a PR professional, I am excited to share the first three tips I’ve learned during my journey.

Pick Your Target Before anything else, this must be done. If you want to be somewhere else, this is the beacon to guide you there. Knowing precisely what you want and where you’re going will keep you focused and motivated to persevere. Find some free time and create a list of your hobbies, anything you enjoy. Think about what you’re good at. Have you always been excellent at providing customer service or managing money? This is the time to acknowledge it—research what job titles or industries would likely fit the items on your list. For example, if you like gardening, you could be a copywriter at a company that produces plants and seeds or write for a gardening magazine. When I created my list, something that stuck out to me was that I enjoyed helping others. So working for a nonprofit was a no-brainer for me.

Know Your Story I picked up an excellent tip from the book U-Turn by Ashley Stahl. In a networking chapter, she talked about an encounter where a guest speaker at her college asked her peers who came up to him after class, “What’s your story?” One by one, she noticed how other students stumbled with this question until another student quickly gave her motivations for pursuing a particular career and why. She realized how vital it is to have a story or even a personal mission statement. Find a way to mention your strengths.

I usually state this:

I was in the Air Force reserves for six years; although I worked as a maintainer, I grew an interest in the work of public affairs personnel on my base. While in school, I worked as a technical writer for two companies. I learned how to deal with fast deadlines but found out the field wasn’t a good fit. The pandemic happened, and I had to reassess what I wanted with my life. I knew I had an interest in helping others, which led me to work for an agency on their public affairs advocacy team.

How would you introduce yourself at a networking event or to a potential employer? You never know who could help you along the way, so be prepared.

Become a Volunteer Now that you know what you want to be, you need the opportunities to emulate it. The best way to gain familiarity in your chosen field is to make yourself available. You’d be surprised at the amount of organizations and entrepreneurs out there needing creative or administrative help. I was lucky enough to find an internship with a respected national nonprofit. It did not pay, but it confirmed the industry was for me, and I secured recommendations from my coworkers. Of course, bills come first, but if you can set aside some time for something like that or even a short-term project, It’s well worth it.

Now that we’ve finished talking about where to start, come back next month, when I’ll share with you the meat of the process, gaining the knowledge, and revamping your resume.